Back to Military Bands History

President Dwight D. Eisenhower died on March 28, 1969, triggering an operational plan that had been in the works for some time. Below are some sections from the plan that illustrate what part the 5th Army Band (76 bandsmen) played, and how the funeral in Abilene, Kansas unfolded. Excerpts from the operational plan are in italics.

Bob Bakke, a piccolo player and band librarian, remembers getting early notification in 1968 of the role that the band would play when the former president died. “We practiced the music every quarter so we would be prepared to leave for Abilene, Kansas in the event of his death in a T-minus so many days.”

A little more than a month before General Eisenhower’s death, Headquarters, Fifth U.S. Army, located at Fort Sheridan, Illinois, had published a final version of OPLAN KANSAS under which the funeral ceremonies for the former President would be carried out in Abilene. In accordance with this plan, a provisional detachment, commanded by the deputy commanding general of the Fifth Army and manned by troops from various units and installations within the Fifth Army Area, was set up on 29 March to complete arrangements and then to conduct the ceremonies scheduled for 2 April in Abilene.

Ted McDowell, saxophone, wrote in his journal about the final days leading up to the Eisenhower funeral. 26 March 69: “We rehearsed Operation Kansas and picked up dress blues, raincoats today.” 28 March 69: “Ike died. Looks like we pull out.” 29 March 69: “The whole post attended a formation in the gymnasium for the formal announcement of Ike’s death. Afterwards the band rehearsed the music & marching procedures to be used. We finished at noon.”

Ted Wanack, trombone, remembered that “we were selected, I believe, due to our close proximity to Kansas and Ike’s past relationship to 5th Army during WWII. We were notified two weeks or so before his death, and began our rehearsals for the funeral procession. Cadence would be at approximately three miles per hour or somewhere around 100 bpm, rather than the standard 120. Our processional music consisted mostly of favorite hymns chosen by Eisenhower, along with selected standard marches.”

Ted McDowell wrote in his journal about the day the band left Ft. Sheridan. 30 March 69: “Reveille at 0430—aargh—. We travelled TWA first class from Chicago to Forbes AFB at Topeka, with four neat stewardesses. It was an exclusive, chartered flight. From Forbes, we took commercial busses to Camp Forsyth, an extension of Fort Riley.”

On April 1st, the day before the funeral, the band “had a dry run in fatigues with all the service honor guards.” The base had laid out the parade route that simulated the actual route in Abilene so the ceremonial units were able to practice before the funeral train arrived in Abilene. The time for practice and rehearsals was over.

Early the next morning, the funeral train arrived with President Eisenhower’s casket and his family. The entourage waited on board at the Abilene rail station while the 5th Army Band and the ceremonial procession assumed their positions nearby.

On Abilene’s North 3d Street, a block and a half north of where the train stood, the military escort units assembled in march order facing east, the first direction the procession would take. These units included the commander of troops and his staff of five; the Fifth Army Band; a company each of the active Army, Marine Corps, Navy, and Air Force; and a company each of Army Reserve and National Guard troops.

The funeral train arrived in Abilene from Washington, D.C. in the early morning hours of 2 April 1969. Security and honor guard personnel took their posts on the train where President Eisenhower remained until 10:00 a.m.

During the last half hour before 1000, the honorary pallbearers who had participated in the Washington ceremonies assumed positions at the door of the funeral car; just before the beginning of the ceremony, the members of the Eisenhower family took their places. President Nixon, Mrs. Nixon, and their daughter Tricia had arrived from Washington at the airport in Salina, west of Abilene, traveled to Abilene by helicopter, and to the train by car.

Promptly at 1000, with all participants in position, the body bearers that had traveled in the train from Washington brought General Eisenhower’s casket to the door of the funeral car, where they halted.

At the siding, the smaller Ft. Riley band (29 bandsmen) provided music for the transfer of the funeral party from the train to the procession that would move through Abilene to the Dwight D. Eisenhower Library grounds.

The procession followed North 3d Street for three blocks eastward, turned south on Buckeye Avenue as far as South 4th Street, and then turned east again on South 4th to enter the Dwight D. Eisenhower Library grounds. The route was lined on both sides by an Army street honor cordon of 10 officers and 720 enlisted men.

As the procession formed and moved to the library grounds, a toll was played on the carillon in the Place of Meditation, the bell sounding at five-second intervals. When the military escort reached the grounds, the escort commander, the commander of troops and his staff, the Fifth Army Band, each company commander and guidon bearer, and the left platoon of each company turned east on South 4th Street to proceed to the library building.

The escort units marched to positions on the Eisenhower Museum grounds opposite and facing the library steps. There the Fifth Army Band would play, and the troop units would render their salutes through the remainder of the ceremonies. The cortege halted on South 4th Street with the hearse at the walkway to the library. Already in seats on the library mall facing the steps were some 500 invited guests. Also in position before the arrival of the procession was a joint honor cordon, which lined the walkway from the street to the library steps and then continued west from the library to the Place of Meditation.

After the cortege arrived at the library, the Eisenhower family and other participants left their automobiles and took positions for the ceremony. The Fifth Army Band sounded ruffles and flourishes and played “Hail to the Chief.” When the band began the hymn “A Mighty Fortress is Our God,” the body bearers removed the casket from the hearse. The procession made its way to the library steps, with General Mock, the escort commander, leading the way, and followed by the special honor guard, national color detail, clergy, body bearers and casket, personal flag bearer, members of the Eisenhower family, the Presidential party, other mourners, and the honorary pallbearers in that order. Former President Johnson, who flew from Texas to Salina, had meanwhile joined the official party.

When the body bearers reached the top of the steps, they placed the casket on a locked movable bier and dressed the flag that draped the casket. The national color detail and personal flag bearer moved to either side of the casket, where they remained throughout the funeral service. After the Eisenhower family and others in the procession had been taken to seats behind the casket, the body bearers left the casket and went inside the library. 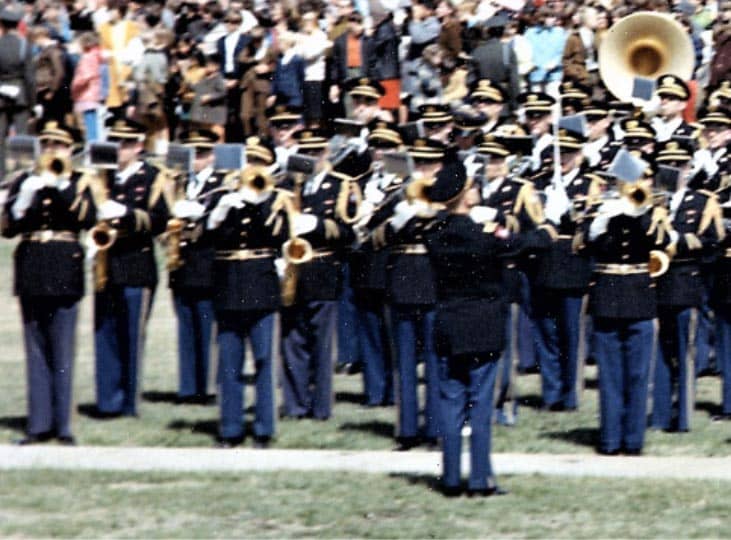 The three clergymen then conducted a religious service for the former President. During the service, a gust of wind characteristic of the Kansas plains blew the flag from the casket. It was quickly retrieved and put back by nearby military officers. Two body bearers then returned to hold the flag in place during the remainder of the service.

At the conclusion of the funeral rites, the other body bearers returned to the library steps, and the team lifted the casket from the bier. At that point, the military escort troop units presented arms, and the Fifth Army Band sounded ruffles and flourishes and played the national anthem, “Army Blue,” and the hymn “Lead Kindly Light.” At the first note of “Army Blue,” General Mock began the march to the Place of Meditation. The procession formed behind him in the same order that was followed when the casket was brought from the hearse to the library.

Because the chapel was small, those attending the burial service, besides the Eisenhower family and the ceremonial participants, were limited to the Presidential party and eighty other persons designated by the family. Whereas the funeral service had been covered by television, the burial rites were not. An audio system had been installed, however, which allowed the public to hear. the final proceedings.

When the procession reached the Place of Meditation, the escort commander, special honor guard, clergy, national color detail, and personal flag bearer entered and moved directly to their ceremonial positions around the crypt. The body bearers followed next, placed the casket on a movable bier, and continued to the crypt, where the casket was put on the lowering device. The personal flag bearer, honorary pallbearers, the Eisenhower family, Presidential party, and invited guests then entered in that order for the burial service.

When everyone was in position, the former Army Chief of Chaplains, Canon Miller, read the burial rites; he paused, however, before pronouncing the benediction. At the pause, the site control officer for the chapel signaled the battery of six howitzers manned by two officers and thirty-six enlisted men from Fort Riley to deliver a 21-gun salute. The battery, in position just east of the library, fired the rounds at five-second intervals. The benediction was then pronounced.

On the grounds just outside the chapel, the firing party discharged three volleys on a signal from the site control officer. Immediately after the last volley, the bugler blew taps. While the Fifth Army Band played “West Point Alma Mater,” the body bearers folded the flag that had draped the casket of the former President. One of the bearers handed the flag to the escort commander, General Mock. At that moment, on a signal relayed by the site control officer, the band stopped playing. General Mock then presented the flag to Mrs. Eisenhower, concluding the final rites for General Eisenhower. As the band played “America the Beautiful” and followed it by “The Old Rugged Cross,” the Eisenhower family and the Presidential party were escorted from the chapel to their cars.

The band reversed it route back to Ft. Sheridan, enjoying the TWA flight to Chicago. 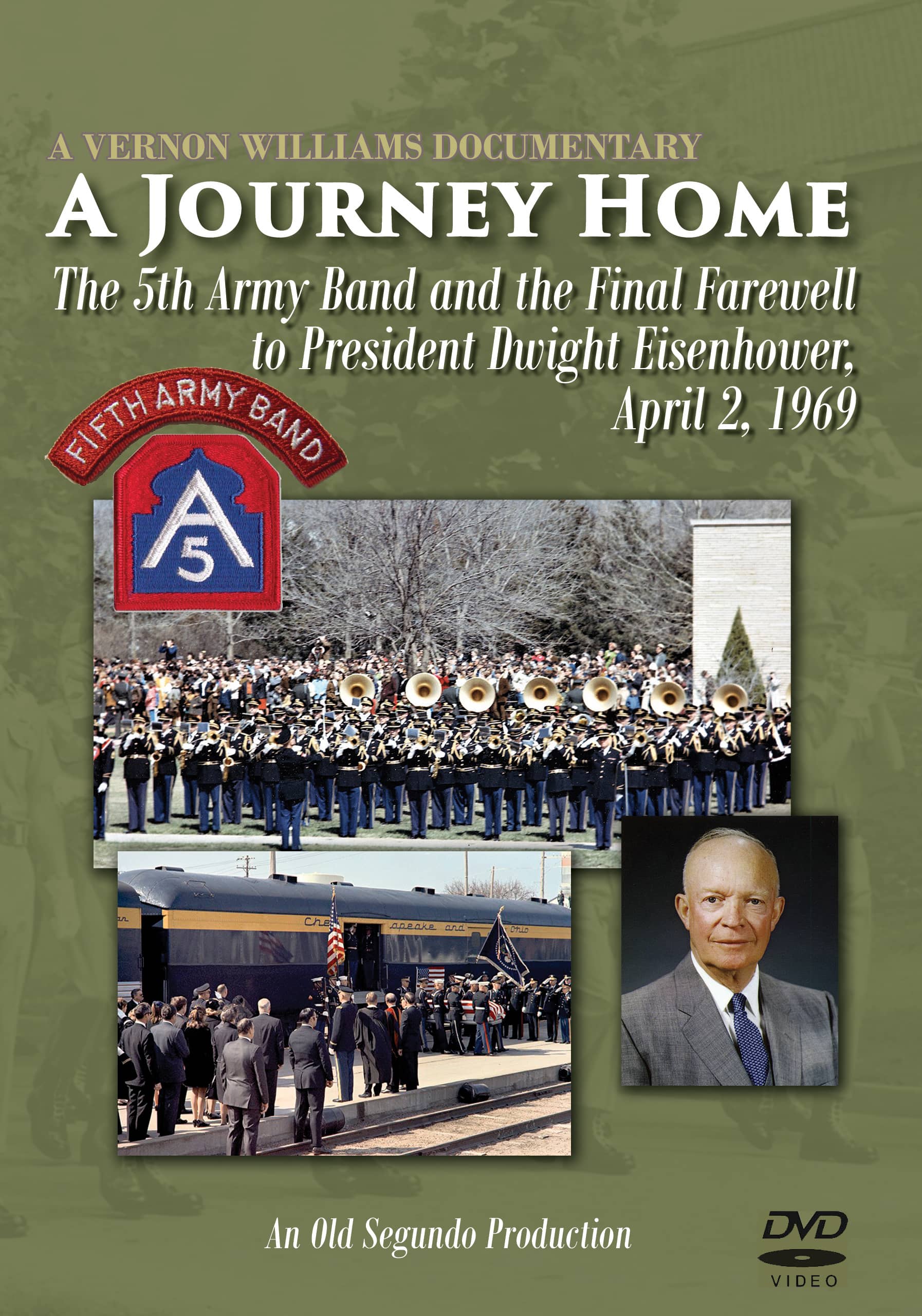 The 5th Army Band and the Final Farewell to President Dwight Eisenhower, April 2, 1969

Back to Military Bands History